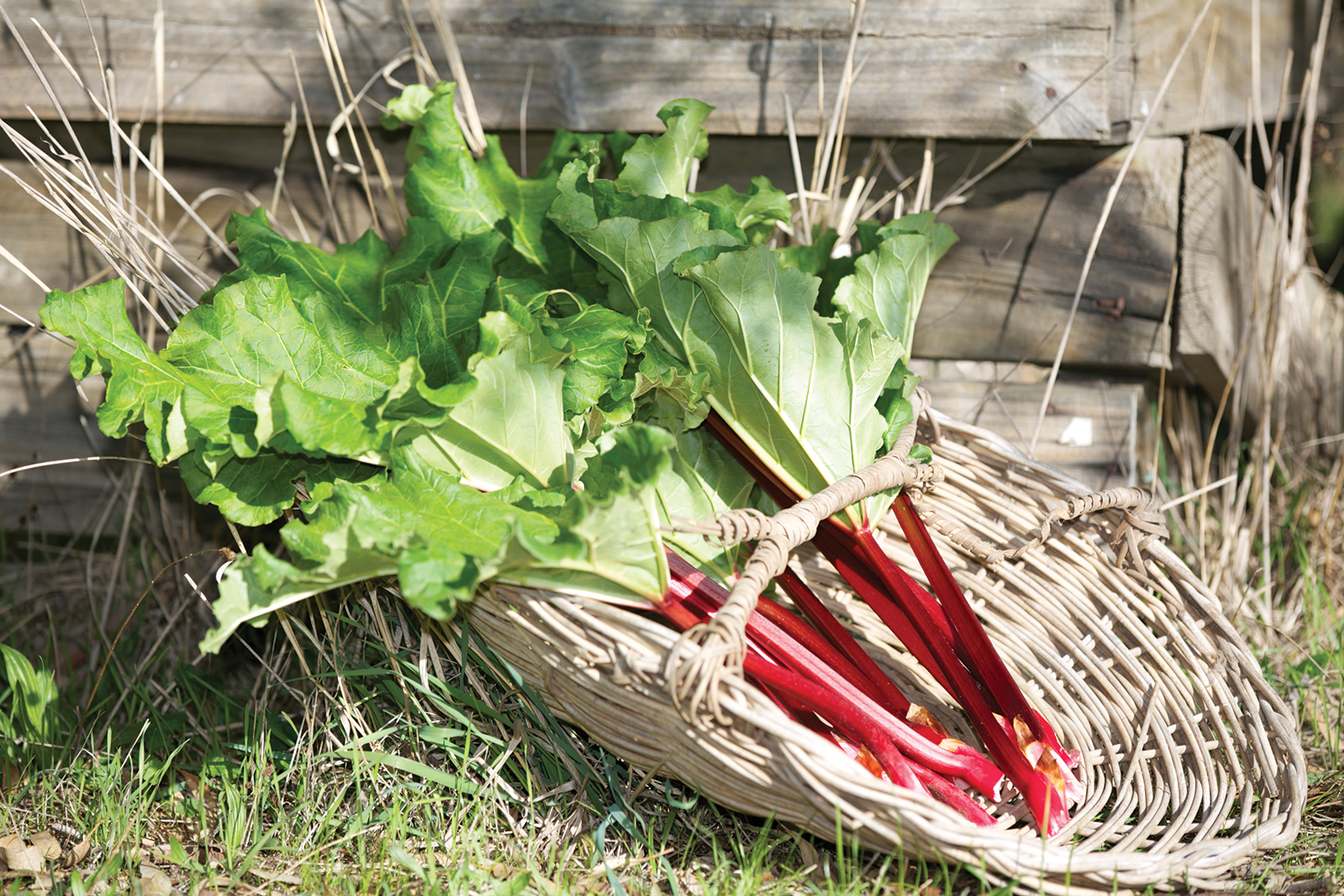 Di McDonald has been dubbed the rhubarb queen for the top quality produce she grows on a three acre plot on a section of Victoria’s oldest winery.

You could say that Di McDonald takes her rhubarb seriously. Granted, this good humoured and forthright rhubarb-growing dynamo is passionate about restoring its good name and putting the enjoyment factor into what has traditionally been received with mixed reactions.

Growing up in Nagambie, and having a father who worked on farms with the philosophy: “If you didn’t grow it, you didn’t eat it, and if you didn’t kill it, you didn’t have it,” Di’s rhubarb enterprise unexpectedly arose after living and working in Sydney for several years. Owed money by a NSW organic farmer, it was the payment of some rhubarb crowns that saw her return to her hometown to commence a new lifestyle. “I’ve always loved gardening, and being in Sydney for 30 years, I just worked and worked and I never got my hands in the soil,” she recalled. “I’ve just found my life has always put a barrier in front and said, ‘Hey, you’ve got to stop going that way and you’ve got to go that way or that way’.” For almost two decades, Di has been growing her protected variety of rhubarb, namely Di’s Rhubarb, on a picturesque bush-lined and birdsong-filled plot of land at Victoria’s oldest winery, Tahbilk. And with a Goulburn River backwater flowing alongside, her 7000 organic (not certified), green leafed and ruby-red stemmed rhubarb plants simply thrive there.

While there is a connection with the property (Di’s mother worked at the vineyard until she was almost 70, and her father used to cook for the Purbrick family’s end of vintage parties), indeed, growing rhubarb of this calibre is all consuming. Five days a week, Di tirelessly works away in her three-acre patch from early morning to sundown, while mid-week is reserved for stewing her tangy rhubarb and concocting her fresh made jams, chutneys and other delectable rhubarb treats. Meanwhile, Di rises at 3am on Saturdays to deliver a slice of her country grown produce to inner Melbourne’s increasingly popular farmers’ markets. It’s where she has been dubbed the rhubarb queen.

With a preference for small, low-growing rhubarb, plus acquiring a wealth of knowledge over the years (a combination of trial and error and rhubarb aficionados’ input), surprisingly Di prefers to keep hers in the ground for as long as possible. Taking about six to eight years to grow to an optimum, Di explained that some rhubarb goes dormant. “Some people think it is dead, but it isn’t. It could be with some types, but I’ve learnt that there is dormant rhubarb, especially the English ones. Mine just grows all the time,” she enthused.
Although the rhubarb leaves are toxic (being high in oxalic acid), Di said they do break down easily and she does sell some bunches whole. “The only people who can buy that are those who have compost or a worm farm because they dispose of it properly,” she explained. “Otherwise it’s burning up carbon emissions.” Alternatively, Di tops and tails the rhubarb stalks, which are sold in reusable bags.

Preferring not to be the same as everyone else, Di is renowned for converting the non-rhubarb fans and the skeptics. “There are hundreds of varieties of rhubarb, and some people love it because they had a really nice variety and their mothers cooked it well,” she said. “Then there was the other stuff that was awful, and it was with water and white sugar. I’d say 99.9 per cent of the people who hate it and I give a taste to, say, ‘Oh, that’s beautiful’.” Pretty intent on how rhubarb should actually be cooked, Di said all you need to retain its natural flavour is to stew the rhubarb with raw sugar. But while her rhubarb essentially flourished from the get-go and has drawn a range of followers, from little tackers starting on solid food, to celebrated chef Neil Perry, Di explained how the last few years in particular had been challenging. Renting an old worker’s cottage at Tahbilk for about 14 years, an onsite gardener’s cottage became available for Di to move into. But her new abode was suddenly no longer. The cottage, along with some of her irreplaceable antiques and belongings, had burnt down.
With her former digs being in a state of disrepair, Di moved back into town. And while she continues to grow her distinctively sweet, natural and earthy tasting rhubarb at Tahbilk, even her namesake produce has had its own hurdles to overcome.

Despite surviving the drought, largely due to using horse manure from local horse studs as a soil conditioner to make “it beautiful and plump”, homemade and mushroom compost, and having access to water, then the heavens broke. “When it rained, it just pounded the soil and it washed all the topsoil away and all the nutrients,” she explained. “I really just had to start over again.”

Add to that a severe accident Di had last year, when she fell on a star-picket and was unable to walk for three months. Fortunately, with the assistance of some terrific friends, she was able to forge ahead.

But while she was attempting to get back on track, then came last summer’s intense heat, followed by an explosion of weeds. “The heat is another reason why this wasn’t planted,” she added. “You just couldn’t stay out here after 11am. It was so hot.” Having only recently replanted her rhubarb, and with demand currently exceeding supply, Di said it had been a much tougher process than when she first started out. “I’ve actually been calling it phoenix rising because it has risen from the ashes,” she added with a laugh.

And while her beloved “girls” (sadly, the chooks were taken by little-known phascogales) are no longer there to freely scratch around in the rhubarb patch’s soil, Di has her affectionate and inquisitive goats, James and Scout, to keep her company while she works – albeit from the other side of the fence.
As the seasons turn, the rhubarb queen is looking forward to a bumper 2014.