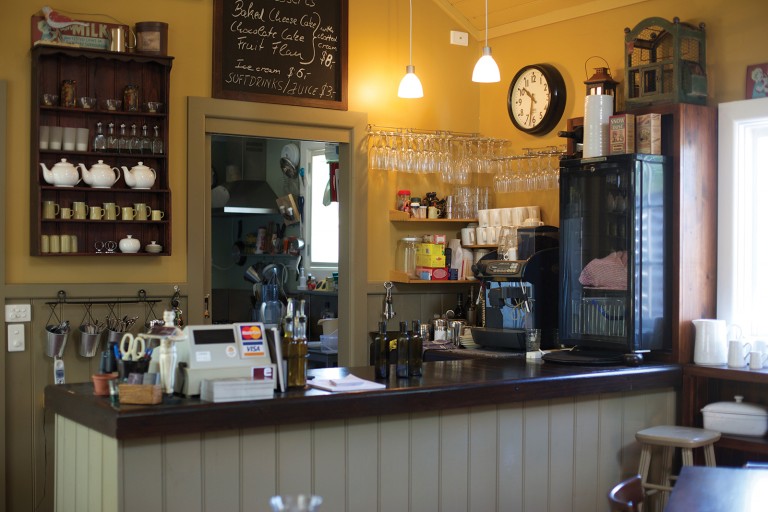 As a teenager, Scott Lawrance couldn’t wait to leave his family’s dairy farm in Yea. So it’s interesting how this well-travelled design-based account director, who has worked for the likes of Harper’s Bazaar and Vogue Australia magazines, has gone full circle and returned to the place he now loves to call home.

“I’m like a homing pigeon because this is home for me, especially now my parents aren’t around anymore,” said Scott, who together with German-born partner Frank Schoenemann lives between there and inner Melbourne each week. “I feel like I’m inextricably connected to it, which I kind of wanted to deny in my 20s, but then I’ve ended coming back here.” A property laden with Lawrance family history (the original 800-1200-hectare farm was bought by Scott’s paternal grandmother in the 1930s and named Koononwootong), over the generations it has come down in size, including where Scott’s parents ran dairy cows. It was several years after they retired that his mother suggested the dilapidated dairy, which his father thought was “a firetrap and needed bulldozing”, would make a lovely cottage for Scott.

“At that stage I was working in Melbourne,” Scott explained. “I had spent time in New York and I’d been up to Maine quite a lot. I loved Maine and all its domestic architecture, so I thought, ‘What a good idea to do a sort of Maine-style cottage’.”

Although Scott’s father didn’t have the same vision, he was “pleased as punch” with the end result: a petite blue-painted weatherboard cottage that now contains a harmonious blend of well-preserved family pieces, such as Scott’s grandmother’s wingback chairs and a framed copy of the original 1941 dairy plans, plus some timeless odds and sods sourced from overseas trips. “It’s been a slow evolution and labour of love working on it for years and developing it, moulding it, and getting the basic structure there,” Scott said of his cosy part-time abode, which is surrounded by fetching rambling gardens. “My father started to get upset when he couldn’t see the cottage anymore (from the 1947 family built home on the hill), because the trees were starting to grow. But I was quite pleased about that because I wanted it to look kind of nestled in the landscape. I wanted it to look established, lived in and homely, rather than just new out in the middle of nowhere.”

Surrounded by undulating countryside, it was about 14 years ago that Scott, who wasn’t interested in having livestock whatsoever, and Frank put their somewhat boutique stamp on the 25 hectares of land that gently rolls down towards the Goulburn River flats.
With Frank’s background as a business analyst and systems accountant, including a stint with a tax adviser in Germany, he suggested to Scott that the land work as a business, not just for pleasure. “We had the land but not the time and income in Yea, so we had to do something on the farm we could sustain,” Frank said. “That is, manage it and have enough water. Olives sounded right and in about 2001 or 2002 we put them in.”

Planting 700 olive trees, encompassing frantoio, manzanillo and nevadillo, Ghin Ghin Olive Grove was born. While the romantic Italian-like notion of producing their own olive oil and table olives held immense appeal, starting an olive grove was a test of patience. According to Frank, olive trees need time. But with drought, they were even more slow-growing.

Scott agrees the first few years were tough. “I thought, ‘What have I got myself into?’ The cockatoo damage was terrible, they just strip the trees off the ground. There were rabbits, and keeping the trees watered was challenging. We lost a lot.”

Having small trees in the beginning meant the first couple of harvests were done by hand. “It was like, don’t look up the grove. It was just horrible,” Scott recalled. “Then we had an invaluable local contact, Ian Dwyer, who was immensely helpful in getting the grove going. He brought in some pickers. And when the trees were more mature, in came a harvesting machine. It was fantastic.”

Although subsequent harvests ran like clockwork, and the high calibre of their extra virgin olive oil and table olives was more or less happenstance, more recently life presented other hurdles, including long-standing associates no longer being able to be involved with the harvest or pressing. Fortunately, the neatly presented olive grove is now relatively maintenance-free with an irrigation system, plus new olive industry contacts have been found for the 2015 harvest. Although olive growing isn’t their core income, Frank said it was rewarding to produce something they can control end to end, right down to Scott bottling the olives and placing his personally designed labels on by hand. “This business allows us to do it slow and steady so we could grow into it too,” Frank said.

While the olive grove was taking root, about 10 years ago, Scott and Frank converted the rather derelict stables that once housed champion show horses (Scott’s father was also a member of the Australian Light Horse Brigade), into a red-painted New England-type barn comprising a storeroom plus a weekend-run farm store and café. It’s in the storeroom the manzanillo table olives are cured in drums with salt brine for about four to five months. The remaining olives head to a nearby press.

In addition to selling their olive oil and table olives from the olive grove, they’re also available at the likes of Punt Road Wines and Yering Station. “When I see it on the shelf, I think that’s why I originally started doing it, because I wanted to see the end result,” Scott said. “I’ve never been able to understand people who have olive groves see their fruit disappear on the back of a truck.”
As for their intimate indoor-outdoor café, Scott and Frank have decided to take a break from it during 2015. “It was a paying hobby, and I enjoyed the social aspect of it,” Scott explained. “It might reinvent itself as something else, I don’t know.” While the olive growing continues, Scott and Frank have been discussing how they can permanently live at Yea. “There is a lot of history on the farm alone, and Scott’s parents and his uncle worked so hard. I have a lot of respect for that generation who had some terrible times but somehow loved it,” Frank said of the property’s ever-growing appeal.

That said, the family ties conjure many fond memories for Scott. “Wherever you are on this farm, your parents are there too because they had such strong presence,” he said. “Doing the garden up there (at the main family house), I can hear mum’s voice over my shoulder, going, ‘That’s lovely, darling’. There’s that connection, which is really important.”

In fact, neither Scott nor his siblings want to see their parents’ former home change too much. “With three generations of family here, the home on the hill is very precious. It’s the inner sanctum where we have family dinners and gatherings. The passage of time will reveal what we do with it. It’s home to all of us.”