A creative at heart, Carol Tregonning is helping bring terrariums and miniature gardens back in vogue.

Although Carol Tregonning can’t recall exactly when her Greenman Miniature Gardens enterprise began (it was sometime in the last couple of years), she definitely knows where it stems from.

An avid gardener, nature enthusiast, and creative who has a decade-long background as an art therapist, it seems fitting that Carol’s personal and professional interests have merged. “I’ve always loved placing pieces that I’ve picked up and then putting them in a vase or something like that,” she said. Despite considering floristry some time ago, Carol felt that she was too shy to pursue anything. Instead, she did therapy work. “I did the therapy because I needed to work on myself,” she explained. “I started doing bodywork, Rolfing, and I did rebirthing. I did a lot of work on myself, then I thought I would do some training, so I did the art therapy.”

But after experimenting with some handmade terrariums and mini gardens in bowls more recently, and being noticed by the The CourtYard homewares and furniture store at Sassafras, Greenman started to evolve. As for the name, Carol said, “It came from a visualisation that I did (while doing art therapy). I was sitting with my mother and my grandmother and this Green Man approached me. So I thought, ‘I’ll use that’. I love myth.” Of course, the Green Man is a mythical nature spirit and/or legendary pagan deity, which has been referred to throughout the ages and across various cultures. It’s usually recognised as a human face that is either surrounded by or covered in foliage. “You often see them in doorknobs or in stonewalls,” Carol added. “They’ve been around forever.”

While the Green Man represents rebirth and a deeper connection to the natural world, Carol relishes spending time in her compact, purpose-built, naturally light-filled timber studio, which is tucked in a front corner of her Sassafras home’s tree-lined garden. In fact, she probably spends more time in the studio creating her exquisite looking miniature gardens than in her larger outdoor one. The latter has essentially been left to look after by her partner, Chris Caldwell, a psychologist who also likes gardening.

Carol’s living green creations are indeed a labour of love. Inside her inviting, highly aesthetic studio, which is neatly adorned with various objects from both nature and op shops, Carol designs her one-off pieces with joy and tender loving care. For Carol, maintaining them is more like a meditation.

With each design simply evolving, Carol particularly likes to use rocks, as well as moss and baby’s tears. She buys most of the stones, and gathers some of the moss from friends’ gardens, which is especially abundant in winter.

Since moving to the area 18 years ago, Carol’s enthusiasm for walking has flourished. “I’ve walked ever since I got here. I go into the bush and down to the waterfall sometimes,” she said. “We’re lucky, there’s hardly anybody (tourist wise) who comes up here to walk.”

It’s during her walks that Carol likes to collect things: pods, seeds, stones, grasses, branches, pine cones, plus various bits and pieces. “Sometimes I get nice pieces of wood that I can use. I just use what I have.”

In addition, Carol likes to buy little plates and dishes from op shops to place as decorative lids on those miniature gardens that are fully enclosed in glass bowls, more commonly known as terrariums. With terrariums harking back to an accidental discovery in 19th century England, even though they were all the rage in the ’70s, and have had a somewhat modern-day resurgence, overall Carol prefers to call her pint-sized ecosystems “miniature gardens”. That’s because some of her creations in the bowls, jars or vases she uses are lid-free. She also has some containing bowls within bowls.

Although these verdant, elegantly shaped, textural miniscapes are ideally low maintenance, Carol said that because hers are created a little bit differently, watering – preferably with rainwater – is key. “People leave them and they can dry out too much, and then they start dying. The moss also has to be kept moist. But you also have to be careful not to overwater them. It’s a bit of balance looking after these gardens.”

While it has been trial and error, plus a reasonable amount of research, as the glass enclosed gardens are predominantly kept indoors, Carol said that it’s good to let some of them breathe once in a while on a covered balcony or porch, particularly if they have been exposed to indoor heating. As living green art, they also like quality time with you. “Like everything, you just have to look after them,” she said. If needed, Carol does provide a maintenance service.

Carol also mentioned that she and Chris have a mutual interest in dream-work and used to run a lot of small group dream-work and mask making workshops together. For now, Chris is managing them, while Carol continues with her Greenman commitments and part-time cheffing gig at Seasons at Cloudehill.

Carol said that although Greenman has certainly been an enjoyable process, there was a time when she stopped making the gardens. It was while attending one of their regular dream-work sessions that a vision literally took her in the opposite direction. “I did have a dream about Green Man and I was running away from him,” she recalled. “Then I stopped and I didn’t do any gardens for a while. Sometimes getting them out there is quite hard for me. I’m a bit shy.”

Speaking of dreams, Carol said that sometimes she recalls hers in “batches” and feels they are more significant than we first think. “That’s why it’s so good seeing people do the dream group and then bring them into the world. I don’t think any of us do enough work with our dreams. It’s a shame because they are so rich and full of information we don’t really know about.” 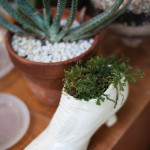 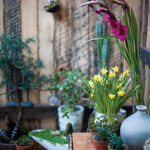 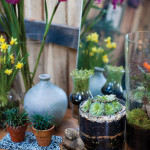 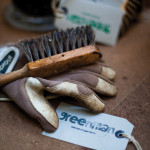 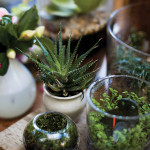 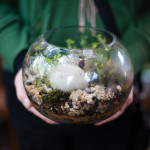 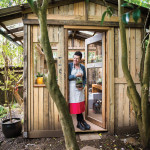 Interestingly, Carol has a decorated mask placed inside her Greenman studio, which was taken from her face. “You have to look at it symbolically and see what that means,” she explained. “I love seeing people do art therapy and bring those unconscious processes up to the surface. It’s amazing and very healing. I’ve loved it all my life. But it’s hard to get people to the workshops.”

As to Greenman growing, Carol is happy to see it progress at its own pace. “I don’t mind if it gets a bit bigger, but I don’t want it to be huge,” she said. “I’d like to do individual gardens and commissions for people. It’s living art and it’s really special.” Carol added that she would like to hire her miniature gardens for small, intimate weddings. She’s also keen to teach people how to create them.

With her Greenman studio being well-crafted by a friend, Carol would like to landscape its surrounds, especially since it has a timber-framed glass door and various windows bringing more of the outdoors in.

And while Carol doesn’t have a formal design background, she’s certainly a natural at what she does. “I would have loved to have done an interior design course years ago, but I’ve got this (Greenman) now.”