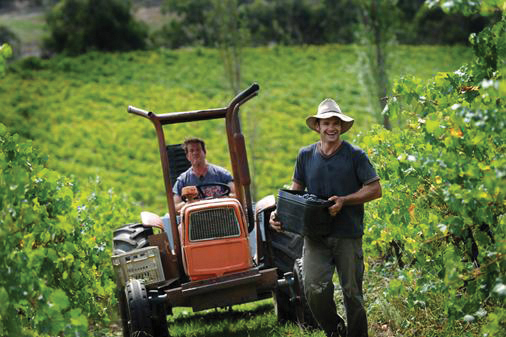 With the first brew launched earlier in the year and the complete range of three beers debuted at the Kellybrook Cider Festival, Kellybrook Winery brings you a new range of locally produced beers.  Venturing from cider to Rider Beers, there are three released beers that will be available from the winery; the Easy Rider, a golden, summery ale, XPA, a 5.8 percent hoppy American pale ale and Loose Trucks, a porter. Phil Kelly among the vines at Kellybrook.
Loose Trucks, taking its name from skateboarding terminology, is perhaps the most straightforward of the three beers; a 5.5 percent porter produced with all English malts that pack an intense, creamy chocolate aroma while remaining light, clean and dry on the palate.
Easy Rider belies any notion of being a tame golden ale. This lightly filtered ale smacks you around the mouth with its huge grapefruit aromas, and has a rounded malt and wheat malt backbone that carried the hops nicely.
XPA presents a combination of rich toffee like English malts coupled with heaps of punchy American hops; Centennial, Mosaic and Amarillo. Standing for Extra Pale Ale, this ale attempts to plug the gap between the stronger American original ales and the weaker Australian versions.
To find out more about the beer, or to place an order, contact Shandy or Gus at beer@ridersbrewing.com.au or visit the Kellybrook website at www.kellybrookwinery.com.au.