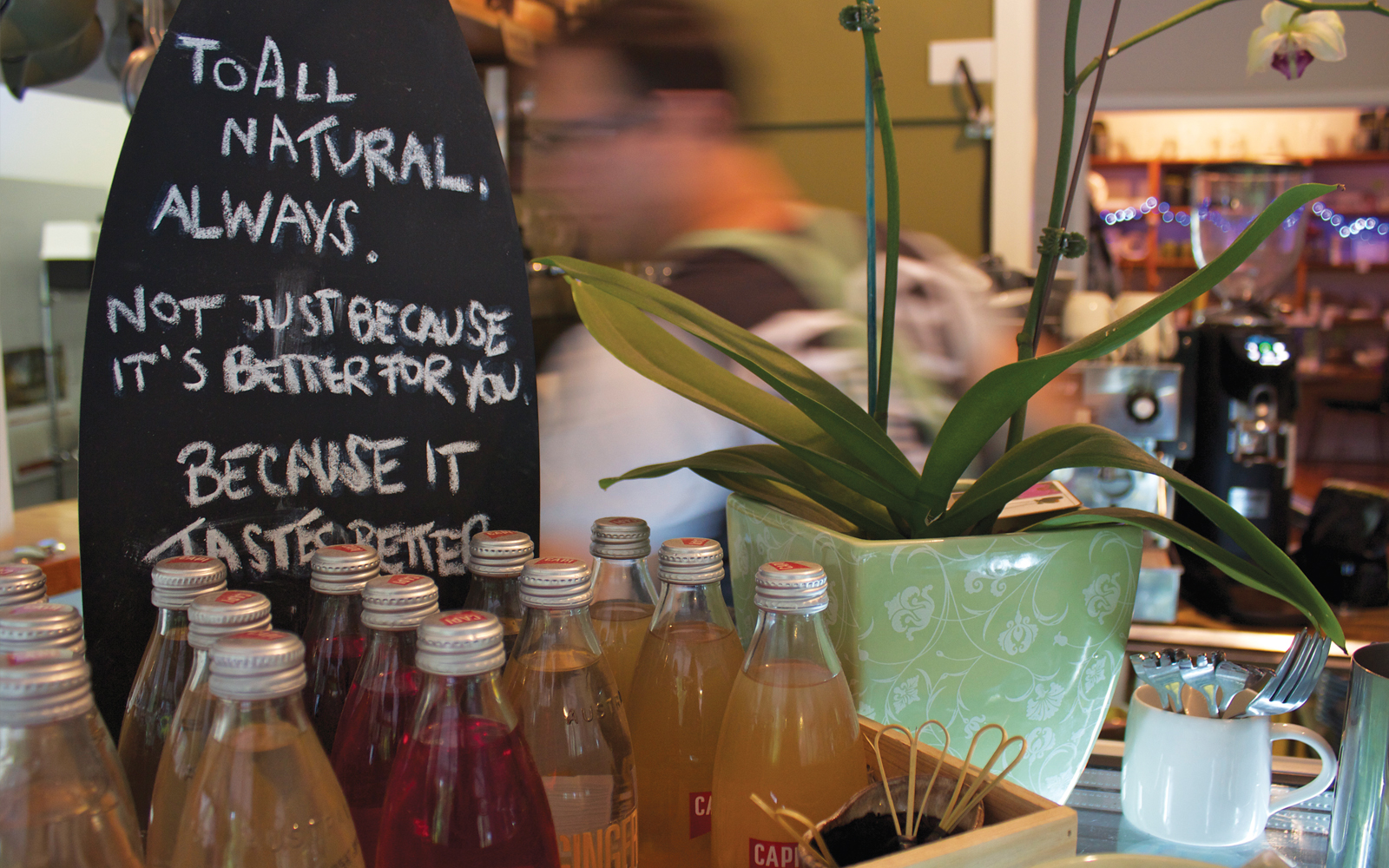 A Belgrave café is successfully riding the fair food wave.

Denise Sangster-Greenwood cares about her food. A lot. Not just how it tastes and what goes into it, but where it came from, how it’s grown and who grew it. She wasn’t always this way.

The turning point came after she had her first child in the 1970s – when Women’s Weekly was the housewife’s bible and frozen peas, microwave meals and fast food all the rage.

“Not long after Heidi was born the first McDonald’s store opened,” Denise said. “It was such a big issue – this wonderful convenient fast food, but my kids weren’t allowed to go because I found out that the bun was produced in a laboratory.”

“My kids grew up thinking that fast food was eggs, boiled eggs!”
When her children did occasionally plead for cheeseburgers, Denise stayed firm, telling them: “My dream is by the time you have your children, we will own and run a chain of food outlets for organic food.”

Her children are all involved – Tahli, Sage, and Heidi work front of house and in the kitchen, while Rory and his wife Stacey manage the one-acre property.

“It’s exciting because we’ve been a lot busier than we ever thought,” Tahli said over a mug of Melbourne-roasted coffee. “We’ve got a Facebook page and an Instagram account but apart from that nothing – it would all purely be word of mouth.”

It may help that Denise’s culinary dream aligns with a major shift in eating habits. People are more health-conscious and aware of how their food purchases affect the environment and farmers than ever before.

Her ethical philosophy is evident throughout Evolve: from the furniture salvaged from hard rubbish and op shops, to the mulch heap outside collecting kitchen scraps to feed the vegetable garden and the shop beside the dining area selling organic cotton clothing and biodegradable crockery.

Many items in the shop come from local makers, who noticed whirlwind transformations taking place in the long-vacant building and popped in to see what was happening. This has led to some unexpected treasures lining the shelves, like fresh honeycomb from a nearby beekeeper. “That was huge, we were selling out every day,” Tahli said smiling.

Sourcing the produce for the kitchen was a lot harder, taking months and several long car trips to organise. As Tahli tells it, ethical food doesn’t always stand up when you look behind the label. “A ‘free range’ egg may only mean that the chicken isn’t caged, but in fact it doesn’t see the sunlight and it’s still being fed chemicals,” she said.

“All our eggs are free range. We’ve researched where they’ve come from and we’ve gone out to meet the farmers and we see that the chickens live a happy life and they see the sun and they eat naturally from the earth.”

The eggs, like everything else in the kitchen, have to live up to the family’s high ideals for what ethical food should be. “We’re mindful of what we put into our body, so we’re not just consuming foods that have potential chemicals, or have been influenced in their growth and that are unfair on the land or the animals that they came from – they’re as natural and organic and raw as they can be,” Tahli said.

Finding chef Kevin Henderson, who previously worked at Shannon Bennett’s The Piggery, was a simpler affair. “He just came in. Just walked in before we opened and said ‘What’s happening here?” Tahli said grinning. “So that could not have been more meant to be.”

True to its name, Evolve is still “a work in progress”. A gardener is busy planting in the veggie patch, building it up so it can supply the kitchen. Denise is sketching plans for a deck out back, so people can sip their coffee under the spreading walnut tree. And a separate building will eventually become a wellness centre, offering yoga and Pilates.

“The time’s right and people are responding,” Tahli said. “A lot more people are caring about what they eat and they understand the process behind food.”

But while they’re happy to be riding the fair food wave, they’re not worried about it hitting the shore. “It doesn’t really matter if trends come or go,” she said. “We won’t change our ways.”