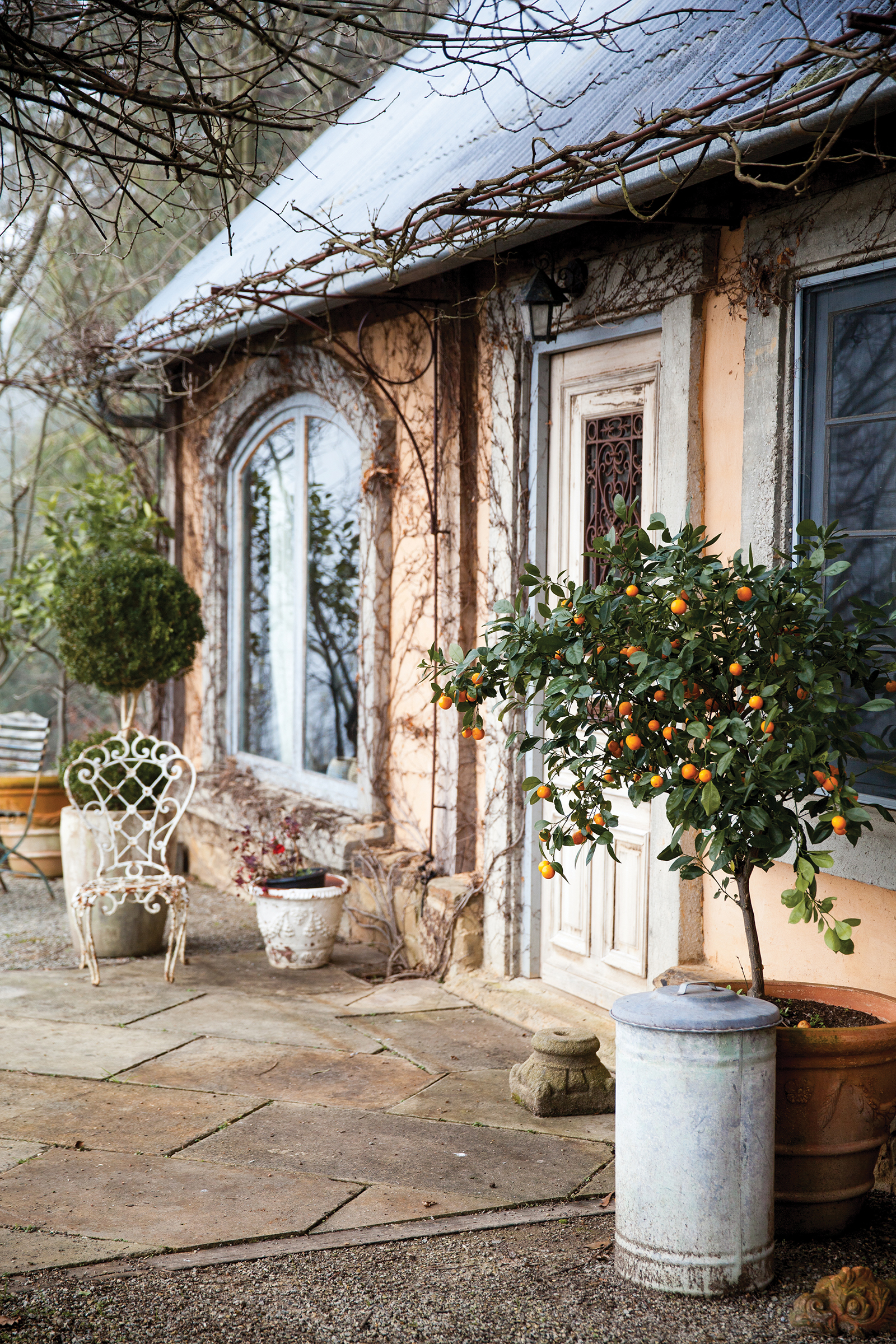 When an artist and an energy consultant meld their love for mudbrick homes and reclaimed pieces, the outcome is simply breathtaking. Robert and Liz Stygall’s Provençal-cum-Tuscan-style mudbrick abode, which stands prominently on a lush green hill near Emerald, appears ageless. While it is indeed a rare, profoundly serene and awe-inspiring space, the story behind Mont du Soleil is serendipitous. In fact, Mont du Soleil, which means mountain of the sun, is the third house the couple has masterfully built. Rather fittingly, it is also their last.

Having already lived in the area for some time, it was an encounter with the property’s previous owner that began their latest chapter. “I used to walk the dog along the road,” said the London-raised and now semi-retired Robert, “and I got talking to the farmer. I jokingly used to say to him, ‘If you ever want to sell this, let me know’. And one day, he did.”

With 40 verdant acres blessed with a highly-elevated, north facing outlook that proffers staggering panorama of the dips and folds of Warburton and the Yarra Valley, Robert and Liz set about creating their astonishingly spacious, airy, passive, low-energy two-storey home complete with a tower.

Taking well over six years to finish the sunbathed house, which is accessed from almost half-a-kilometre of sinuous, tree-lined driveway, it was only about a year ago they put the final touches on their French and Italian influenced garden. It was somewhat timely, given their daughter, Emily, recently married at what has become an honorary gazebo at the front of the house.

For a home that was built less than two decades ago, what’s remarkable about it and the cluster of outbuildings, including a self-contained studio for visiting family and friends, is the seamless yet ancient look and feel. Complementing the mudbrick walls and concrete floors, Robert said they mostly used recycled windows, doors and timbers, as well as corrugated iron roofing to add a quintessential Australian feel.

Liz added, “With mudbrick, you’ve got to be so careful with putting it together. If you go too modern, it looks wrong. And you can’t go too scraggy. It’s a really fine line between making it work and not.”

As to where their affinity for mudbrick comes from, Robert and Liz were hooked after visiting renowned mudbrick designer and builder Alistair Knox’s home. With Robert’s background in managing an energy consultancy and an ardent interest in low-energy house design, he finds mudbrick’s solidity appealing. Meanwhile, artist Liz relishes its “churchlike qualities”, which provide a soothing, earthy connection.

According to Liz, mystical-type happenings played a part in Mont du Soleil’s creation. “I spoke to a psychic and I said, ‘It’s really weird, whenever I needed something (like a door or a bath), it just came’. And she said, ‘I think you’re on an Aboriginal ley line’. Later on, somebody else thought the same thing. Everything just seemed to flow. It’s almost like it was meant to happen.”

When taking a closer look at the mind-blowing architectural detail, both inside and out, salvaged timber beams dating back to the 1920s hail from a bridge in Gippsland; wrought iron fencing and bluestone come from the old Melbourne Cemetery; and timber from an old railway station in Western Australia is used in the bucolic stable-like garage. (Interestingly, the garage is slightly reminiscent of that at Montsalvat.)

Evidently, Liz is somewhat of a garage sales and market aficionado, with Camberwell Market being a firm favourite. It’s from such treasure troves that she has accumulated their extensive and eclectic collection of well-preserved pieces over the years. “We always had more than we needed, so we had choices,” she said. “Now I’ve started doing garage sales in the big shed (at the front of the property) to get rid of what we’re not going to use.”

As for the garden, which is like a gracious work of art itself with its inextricable weaving of roses, citrus trees, topiary and lavender, all of the landscaping has rather impressively been completed by this creative duo who have a practical and discerning eye. Liz said their inspiration predominantly came from former French fashion designer and stylist Nicole de Vésian’s innovative Provençal garden, La Louve.

“When she designed her garden, she said, ‘If you are dealing with a big view, you almost need to emulate it in a smaller way in a garden, because everything else is not going to work’. So in a way, we are sort of emulating what’s out there by shapes,” Liz explained while sitting under the vine-clad pergola on their sun-dappled terrace. “We’re nearly at a stage where it will look after itself. That’s why we mono-planted. It’s much better when you have a big property like this.”

Tuning in to the spirit of the property, they occasionally have friends who run daylong holistic or spiritual well being workshops there. These include yoga, meditation and psychic healing.

In terms of enhancing the house’s low energy design, Robert said they placed water coils in the slab for future use, especially since he’s considering using geothermal or ground source energy.

While it’s only recently that Robert and Liz have been able to fully enjoy the fruits of their extensive labour, they relish their idyllic lifestyle. For Robert, it’s like having their own microclimate. “There aren’t many places in the world where you can live like this. We’re very lucky,” he said. “Our daughter didn’t like mudbrick. But now she’s grown older, she’s sort of seeing it in a different light.”

Meanwhile, Liz believes they live in paradise. “Even when it’s frosty down there (in the valley), the sun peeks through on the hill. I think we are privileged to be here for now, especially when the world has so many things going on.”